This section is dedicated to the embryo sires we are presently using in our OEB (Octoraro/Em Brook) IVF program. We have been producing embryos for many years from a “Genetic Seed Saver” approach and now we are concentrating our effort mainly with old reliable Wye Angus genetics. We feel the breeding commit by Wye Angus has created a guideline second to none in our pursuit of excellence in cow herd development. The yesteryear bulls of Wye Angus provides us the road map to building a cow herd for today’s cattle industry. Built with CED, docility, superior udders, good structure and the highest $EN in the land. We hope this will help you understand our cattleman’s journey to preserve the Angus breed from a maternal point of view. We have been very fortunate to possess some of the rarest semen from the “Legendary Wye Angus Program”. The following is a partial listing of some the bulls we are using in our OEB IVF Program. Although this very rare semen is in limited supply, we do have some available for sale. We start our embryo sire lineup with the Legend of Legends Prince of Malpas. Born in Scotland in 1956 and imported to America as part of early building blocks of Wye Angus.

Prince of Malpas was one of the most influential bulls in developing the WYE Plantation cattle herd. He was a 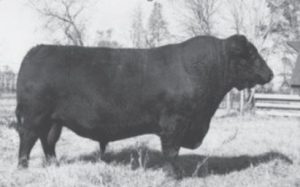 Scottish import, bought at the Perth sale. Look at his picture and you will see the extra volume, capacity, length, smoothness, fleshing ease and masculinity. He was used very successfully at WYE to produce both bulls and females. The sons that have come to fame and have the same transmitting ability as Prince did include Arlington, Lafayette , Leigh, Cyrus, and Adalard, just to name a few. They are all highly sought today due to their ability to transmit the maternal goodness that was locked into the cattle. On the female side, Sam’s personal favorite daughter of Prince would be the grand Laura cow, 1022, in the WYE program. Her direct son, by Corbin of WYE is Lonestar. We have a Lonestar flush female, bred to Qualton of WYE, which resulted in several ET weanling daughters that are double granddaughters of Lonestar. So, we can go back and tap into the old genetics thru constructive linebreeding.

Vindicator of Milford was one of the early bulls imported from Scotland into the Wye program. He did a remarkable job. We were able to find a small amount of semen. It was reverse sorted and we will be offering two lots of two sexed heifer embryos. In recent years Vindicator was used in the Wye program and produced Boyd, who did an outstanding job producing maternal, efficient females. He was not fully recognized as being an outstanding bull at that time. In more recent years they have gone back and used Boyd again in their program. There is lots of maternal and carcass goodness in old Vindicator of Milford.

Fabron of Wye (24671 17) is a 1960 model bull that was massive in stature. He did a lot of things correctly in his progeny. Jim Lingle was Sam’s mentor while at Wye Plantation. Fabron was his “Masterpiece”. The goodness of the Wye program was pretty much built on Fabron’s genetics. He transmitted extremely well. His dam was a Gaird daughter and she was quite a cow. You can line breed to Fabron without any negative results. We still have a little semen to be used invitro. Fabron was used this fall, invitro on several cows.

Banjo of Wye, was born in 1989, a son of Lone Star out of a tremendous Leonid of Wye daughter, the old Pathfinder cow, 5362. Sam remembers her well. In his opinion, she was the epitome of maternal function and she had a great influence on the Wye herd. Multiple sons were used in the Wye herd. Banjo was owned by David Freeman and Diamond D Angus in Valier, MT. The Duboo family has done a masterful job of linebreeding to Banjo. He has been an instrumental component of their maternal efficiency program, which is based on the Angus cow. Nothing extreme, except for fertility and longevity, which Banjo and Fahren brought to the forefront of the Diamond D cow herd. Banjo was tightly linebred to Colleen and Luria. He is also linebred to the imported bulls Prince of Malpas and the old Gaird of Dalmeny bull. There is lots of maternal goodness locked into this individual. There is no doubt that he can do the job, so far as making long lived, trouble free, replacement females.

Churchill of Wye (6026113) was an impressive bull that was a Lodge of Wye son. Churchill’s dam had the distinction of probably being the greatest cow to ever walk the pastures at Wye Plantation. She was the Colleen cow, a Gaird daughter. She was a big voluminous brood cow that transmitted extremely well. She has two full sib sons, sired by Fabron: Columbus and Corbin. Churchill was her very last son. He is calving ease and he transmits her maternal goodness.

Qualton of Wye (8180039) is a Lonestar son. He is out of the grand Prince daughter, 1022. She may be the most efficient Wye cow and she transmitted extremely well. His daughters will make momma cows. Qualton was sold to Shoshone Angus in WY. Larry dominated the Midland Test by putting the growth factor into his cattle. To concentrate on the cow side of the factor Qualton enabled him to do that. They were very milky, with fancy udders, not real big, but real working cows. The Shoshone maternal program was built on the strengths of Qualton’s cow making abilities. We still have a little Qualton semen left and will continue to use it for invitro work.

Federal of Wye is a ¾ brother to Lodge of Wye. He is actually a better bred bull than Lodge. Federal is a son of Career out of a Prince of Malpas daughter that was out of Fabron’s dam, Matilda G, a Gaird daughter. Sam remembers well the goodness of the brood cows of Federal daughters.